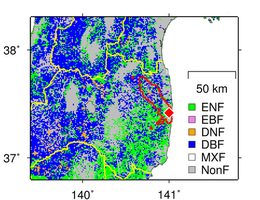 There has been leakage of radioactive materials from the Fukushima Daiichi Nuclear Power Plant. A heavily contaminated area (≥ 134, 137Cs 1000 kBq m−2) has been identified in the area northwest of the plant. The majority of the land in the contaminated area is forest. Here we report the amounts of biomass, litter (small organic matter on the surface of the soil), coarse woody litter, and soil in the contaminated forest area. The estimated overall volume and weight were 33 Mm3 (branches, leaves, litter, and coarse woody litter are not included) and 21 Tg (dry matter), respectively. Our results suggest that removing litter is an efficient method of decontamination. However, litter is being continuously decomposed, and contaminated leaves will continue to fall on the soil surface for several years; hence, the litter should be removed promptly but continuously before more radioactive elements are transferred into the soil.